Squeaking in One for September 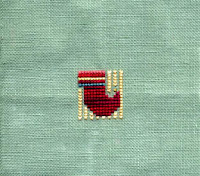 I really did not think I would be able to stitch an ornie this month--last weekend was so chaotic that I was completely unable to stitch on Saturday and Sunday. Today, after dealing with fussy sick kids for a few hours this morning while DH snoozed and all day yesterday while he worked, I said, "Here!" and handed off the baby to a surprised DH. In less than two hours, I stitched this cutie and sanity--or at least my version of it-- had returned.

It's stitched on 32 count Antique green Permin linen with none of the recommended colors. Instead I used: DMC 4210,Toffee by Six Strand Sweets, 607 Govenor's Blue, 601 Golden Memories and 602 Holly Berry all by Olde Willow Stitchery from the Christmas in Williamsburg Collection. You can barely see it, but I also used a gold PTB on the stocking tip. That may become a bead later, I haven't quite decided.

Bead or not, I think the design is adorable.
Posted by Holley at 11:39 pm 1 comment: 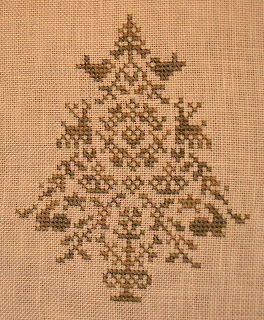 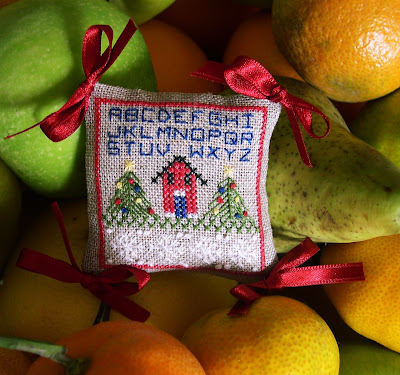 During summer I had no chance to stitch, but now I am here again. The little september-cushion will find its place in the walnut basket. It is from JCS, Christmas 1999, stitched on natural linen, 40ct.
Saludos de las Islas Canarias,
Birgit
http://www.lamone.canalblog.com/
Posted by lamone at 7:44 pm 3 comments:

I wish I was as good as most of you here and could say I’ve stitched one ornament a month. *kicks rocks* I have not though. So, I’ve decided to just get the final two Shepherd’s Bush ornaments done of this series this year. I have 4 done now! I love them :)

Here are two I finished this month:

I plan on finishing them into pillow ornaments for my tree. A wall hanging would be very cute too, but I don’t have enough wall space :) I have also left off the silver charms and stitched what the charm would be onto them.
Posted by Heather at 9:01 pm 1 comment:

at long last, an update

I have been stitching ornaments, really. But finishing ... sigh ... remains a bit of a weak spot with me. But here are pictures of a few ornaments I finished yesterday and today. I'm not ready to turn pro, but I think they look okay. :D

The designers are, in order: Blackbird Designs, Birds of a Feather, Heart in Hand,
and Prairie Schooler. 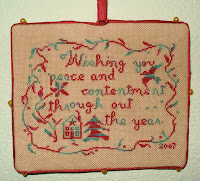 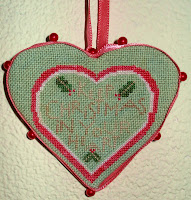 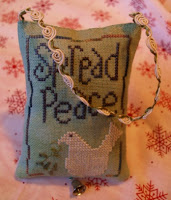 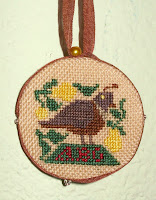 Labels: Birds of a Feather, Blackbird Designs, Heart in Hand, The Prairie Schooler

This is my latest ornaments. They are crafting projects from Tilda's "Crafting Christmas Gifts" book.
I have quilted a simple heart, the fabric is a Red Rooster Gentle Christmas Green Garland/Red Dot Stripe on Beige. And these are six gingerbreads, with various decorations. The buttons are from Shelley's Buttons. I actually finished this a month or so ago, but didn't share as I hadn't made it into an ornament yet. I will do that sooner or later!

I really like this leaflet and may do a few more of the bird duets.
Posted by Dianne at 3:50 am 3 comments: 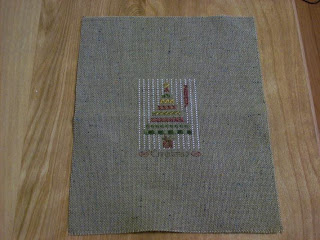 This is "Christmas Tree 2007" by Jeannette Douglas. The pattern is found in the October 2007 JCS. I do not know what type of material I stitched it on because it was tagless in my stash, but it felt like there may be a little bit of wool in it.
My photo taking is not the greatest. I just reviewed the post and realized that you may have to click on the photo to see the design properly. Sorry!
Posted by vee at 10:34 pm 2 comments: 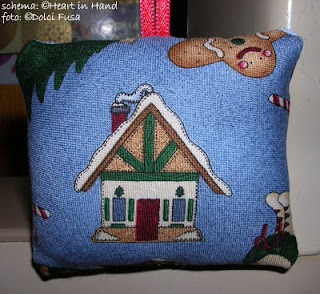 This is my late July ornament. It's Home, from Heart in Hand.
I have stitched it on a 28ct permin linen color Monet and used the WDW threads.

The back fabric is a Mumm Cozy Northwest Christmas Motif Toss on Blue.
Posted by Dolci Fusa at 8:17 am 1 comment: